Long story short, Tom Lane committed a few changes (commmits 86dc90056d, c5b7ba4e67a, a1115fa0782) to the v14 development branch that will help update and delete queries run little a bit faster, especially on tables with many columns of which only a few are typically updated in a given query. More importantly, those changes allowed the refactoring of some legacy code for handling update and delete queries on partitioned tables, which will make them run still faster compared to v13, and will enable them to use execution-time partition pruning (only select queries could use execution-time pruning before). These and some other improvements in the execution of update/delete plans will allow prepared update and delete queries on partitioned tables run faster compared to v13.

To understand what changed, let’s consider how Postgres carries out an update statement. The plan for an update consists of a node to retrieve the rows to be updated and another node on top that invokes the target table’s access method routine to perform the actual update and peforms other auxiliary actions like updating the indexes, fire triggers, etc. While the latter (the top-level node) mostly works the same in v14, there’s a new task for it now due to some changes made to the output format of the former (the node producing the rows to be updated). Previously, that node produced the whole new row that the top-level node could pass as-is to the table access method, which in turn would replace the old version with the new one. This is how it would look as a plan:

Note the Output: (a + 1), b, c, ctid line of the Seq Scan node. Along with the new value for the a column that is changed in the statement, it also contains the values for unchanged columns b, c. (Note that they come from the old row that was read from the relation file and matched against the where quals by the scan node.)

In v14, the scan node no longer outputs the values for b and c, the unchanged columns:

The scan node now only outputs the values for the changed columns and so the top-level node must fetch the old row again (not as expensive as it may sound) to form the full new row. EXPLAIN unfortunately isn’t of much help to figure out where exactly the new row gets formed, but maybe it’s not that important for users to know.

One performance benefit of this new arrangement is that the scan node now needs to pass narrower tuples up to the top-level node. Because that passing of tuples across nodes occurs by copying the data column-by-column (whether by value or by reference depending on the column type), and as there will now be fewer columns to be passed across due to this change (only the changed columns), one can expect the overhead of that copying to be less. That effect would be even more pronounced if the scan node is not a simple table scan like in the above example, but say a join, in which case there are more plan levels for the data to have to be passed across.

Okay, so how does this help partitioning?

Because the old way of carrying out updates needed the scan nodes to produce a full new row matching the target table’s schema, the plan would need to contain a separate node for each child table when updating inherited/partitioned tables. Remember that non-partitioning inheritance allows each child table to have its own columns, so this hassle was necessary in that case, but an annoyance for partitioning which doesn’t allow such a thing. This is how it looked:

You may notice that there’s a tableoid column present in the output that wasn’t there before. It tells the top-level node the OID of the child table from which a given row to be updated came from. Such an identity column was not necessary before, because each child table would have its own subplan. Mapping from tableoid to the update/delete execution state struct of the relevant child table does add a tiny bit of overhead per row.

Note that there are still as many nodes to scan children as there were before, but because they are added at the bottom the plan tree, not at the top as before, they can be added more cheaply. (This statement only makes sense if you consider that the amount of work the planner has to do to create a node at the bottom is less versus creating it at the top.)

While this new arrangement makes it a bit faster to make the plan for update on a partitioned table which is good in and of itself, a more important bit is that the plan will now have an Append node in it to scan the partitions. What’s great about it is that that means that update (and delete) can now use execution-time partition pruning, because the Append node provides that ability. Having that ability allows generic plans for prepared update and delete to be executed without having to process the partitions that need not processed per the query’s prunable where clauses.

With the new execution-time pruning ability and a few other efficiency improvements in how the plan for an update is executed now results in better performance. Although, there are still architectural inefficiencies left to be fixed, so the performance still tapers off as the partitions count grows. To end this post, here is a graph showing the performance of a prunable prepared update of a 10-column partitioned table with various partition counts. 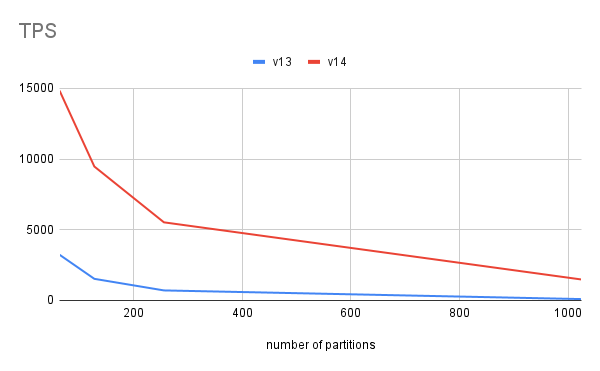