Postgres: on performance of prepared statements with partitioning

Prepared statements (aka parameterized queries) suffer when you have partitioned tables mentioned in them. Let’s see why.

Using prepared statements, a client can issue a query in two stages. First, prepare it using PREPARE a_name AS <query>, followed by multiple executions using EXECUTE a_name. During the PREPARE step, the backend will only parse-analyze the query and remember the resulting parse tree in a cache using the provided name as its lookup key. During each EXECUTE step, the backend will look that parse tree up in the cache, create or look up a plan for it, and execute it to return the query’s output rows. Note that both PREPARE and subsequent EXECUTEs must run in the same connection, because the storage used for the parse tree and the plan for a given query is process local at the moment.

The query specified in PREPARE may put numbered parameters ($1, $2, …) in place of the actual constant values in the query’s conditions (like WHERE). The values themselves are only supplied during a given EXECUTE invocation.

The benefit of this 2-stage processing is that a lot of CPU cycles are saved by not redoing the parse-analysis processing on every execution, which is fine because the parse tree does not change unless objects mentioned in the query were changed by DDL, something that tends to happen rather unfrequently.

Even more CPU cycles are saved if the EXECUTE step is able to use a plan that is also cached, instead of building it from scratch for every execution, that is, for each fresh set of parameter values.

The performance benefit of this 2-stage protocol of performing queries can be easily verified using the handy pgbench tool, which allows specifying which protocol to use when running the benchmark queries using the parameter --protocol=querymode. The value simple instructs it to execute the queries in one go (parse-plan-execute) and prepared to use the 2-stage method described above.

The latency average for query SELECT abalance FROM pgbench_accounts WHERE aid = ? is 0.031 milliseconds when performed using the 2-stage protocol versus 0.058 when using the simple protocol, so the caching does seem productive.

It’s interesting to look at the mechanism of how the plan itself is cached, because that is where the problems with partitioned tables can be traced to. The backend code relies on the plancache module which hosts the plan caching logic. When presented with the parse tree of a query, its job is to figure out if a plan matching the query already exists and if one does, check if it’s still valid by acquiring read locks on all the relations that it scans. If any of the relations has changed since the plan was created, this validation step (the locking) detects those changes and triggers re-planning.

An important bit about such a cached plan is that, when creating it, the plancache would not have passed the actual values of parameters mentioned in EXECUTE to the planner, so it is a generic (parameter-value-independent) plan. In most cases, the plan is the same as one that the plancache would have gotten by passing the values, because the planner is smart enough to perform some of its optimizations even in the absence of the actual constant values to compare against the table/index statistics, at least for simpler queries. For example, it can heuristically determine that an index on colname can be used to optimize colname = $1 in a similar manner as it can be used for colname = <actual-constant-value>.

Now, while pruning will occur during execution (run-time pruning), there are a number of steps that manipulate the generic plan that must take place before the pruning can occur, each of which currently takes O(n) time, where n is the number of partitions present in the generic plan. One of those steps, the one that consumes the most time, is the plancache module’s validation of the plan which must lock all relations mentioned in the plan. The more partitions there are, the longer it will take the validation step to finish. The following graph shows the average latency reported by pgbench -S --protocol=prepared with varying number of partitions (initialized with pgbench -i --partitions=N in each case), which shows the latency increases as the number of partitions increases: 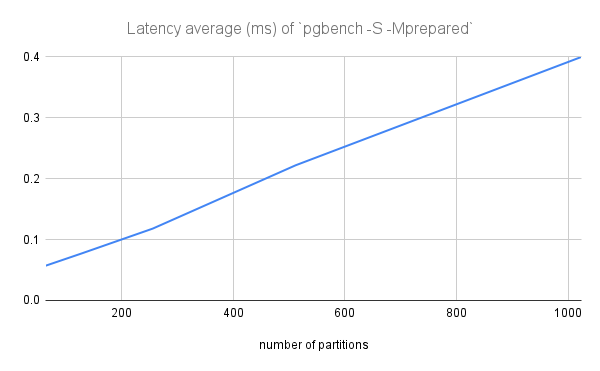 The following graph also plots the latencies one may see by forcing the plancache module to create a parameter value dependent (custom) plan on every EXECUTE (by setting plan_cache_mode = force_custom_plan in postgresql.conf), whereby the planner is able to prune the unnecessary partitions: 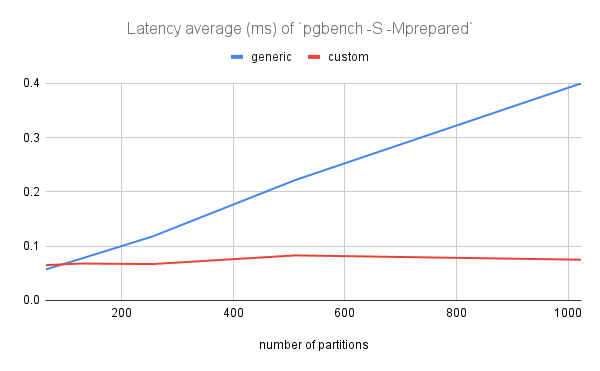 However, forcing re-planning on each EXECUTE means leaving the peformance benefit of plan caching on the table. So I proposed a patch to fix the generic plan validation step such that it only locks the partitions that match the parameter values mentioned in EXECUTE by performing the run-time pruning earlier than the validation step. Here is the graph showing the improved generic plan execution latency after applying the patch: 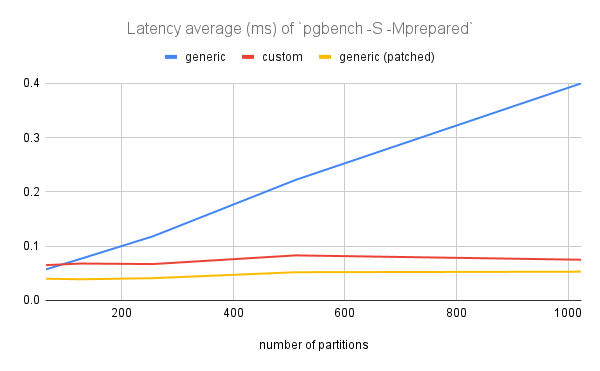 As expected, the latency no longer degrades, and perhaps more importantly, is indeed lower than with forced re-planning on each EXECUTE.

Note: With default setting of plan_cache_mode (auto), Postgres currently will choose a custom plan for partitions because a generic plan looks expensive given that it must contain all partitions, so the performance one gets by default looks more like the custom line in 2nd graph. Along with the patch I mentioned above which improves the execution performance of generic plans containing partitions, we will also need to fix things such that generic plans don’t appear more expensive than custom plans to the plan caching logic for it to choose the former. Till that’s also fixed, users will need to use plan_cache_mode = force_generic_plan to have plan caching for partitions.